50 Cent was the heir apparent to 2pac – So what happened? 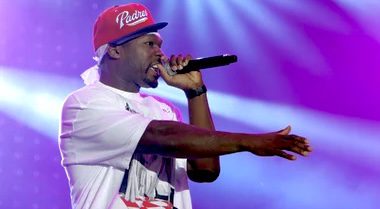 Most any person in America between the ages of 30 and 50 can likely attest to the monumental commotion which ensued upon 50 Cent’s proper arrival on the hip-hop and pop culture scenes in 2003.

Curtis Jackson’s meticulously calculated ascent to stardom was backed with the endorsement of legendary hip-hop producer, rapper, and label executive Dr. Dre – who at the time was only four years removed from his acclaimed sophomore album 2001, and was already a highly respected veteran based on his work with NWA, Deathrow Records, and Snoop Dogg.

Also providing the seal of approval was Eminem, who was at the height of his popularity at the time coming off the massive success of “Lose Yourself,” along with a string of the greatest hip-hop albums ever recorded.

Still, it is hard to imagine that anyone could have predicted the success the South Jamaica, Queens native would rapidly attain, and with the release of debut single “In Da Club” at the outset of 2003, Curtis “50 Cent” Jackson, for a time, had the music industry in the palm of his hand.

The rapper quickly proved himself to be no slouch in the business department and, smelling blood upon his initial success, quickly expanded his brand – creating a label of his own, establishing a clothing company, inking endorsement deals, and marketing himself within an inch of his life.

This business acumen ultimately led Jackson to an immensely successful career spanning multiple vocations, but also led to a distinct decline in focus on what had landed him in the spotlight to begin with – music.

2003’s Get Rich or Die Tryin’ would foretell a prophecy that the rapper turned mogul would fulfill with haste, and it remains a significant entry into the broader hip-hop lexicon. But why is it that we hear so little discourse of subsequent material from the man who created what is widely regarded as one of the greatest hip-hop albums of all time?

Truthfully, one could speculate that this is because during the recording of Get Rich or Die Tryin’ Jackson was genuinely hungry for success, blood-thirsty even, and he clearly gave a certain consideration to the execution of his craft.

By the time The Massacre hit shelves in 2005, 50 Cent was far from an up-and-comer. In fact, It could be argued that he’d dethroned his mentor Eminem as the biggest hip-hop act in the world at this stage, particularly considering the lukewarm reception to the latter’s 2004 release, Encore, which frustrated critics and fans in equal measure.

The Massacre came packed to the brim with content at a whopping 22 tracks – for each of which a slapdash “music video” was recorded – and shattered sales records, moving 1.15 million records in its first four days of release.

50 Cent was on top of the world, yet one couldn’t help but feel that there was something missing – an emptiness at the center of the pop hits and label monopolies. The hunger was gone, or at the very least, redistributed to other areas of concern.

50 Cent the artist had given way to Curtis Jackson the businessman, and more power to him. The notion of selling out is almost universally derided as being a bad thing, but selling out means that you have something worth buying.

And so it would come to pass that 50 Cent arrived on the music scene like a meteorite and reinvigorated that gangsta rap sub-genre, only to cash out while the getting was good and leave the music to the snap-music wolves by which its corpse would be mutilated over the years to come.

But the musical atrocities committed by the likes of Dem Franchize Boyz and D4L are not what we’re here to discuss today, for that judgment is perhaps best left to Saint Peter Gabriel to whom these monsters will be forced to one day answer upon their departure from this mortal realm.

No, today we discuss the jacked up, 28 year old monster performing on stage in a durag and bulletproof vest who would say anything to anyone on any day.

For a brief and shining moment in music history, Curtis “50 Cent” Jackson, by all accounts, appeared to be the logical successor to the one and only Tupac Shakur, who had passed a mere 7 years prior to the explosion of Jackson’s own career.

2pac and 50 Cent shared a reckless sensibility, and its own that Jackson has yet to repudiate entirely. The two shared similar looks, subject matter, criminal histories – yet the music of Get Rich or Die Tryin’ was clearly something fresh, rather than a pale imitation of the blueprint laid by Shakur throughout the 90s.

50 Cent was another 2pac, he was the next step. The vitality of the delivery on that first (major label) album was and is searing. Jackson possessed an innate knack for flow, and has always exhibited the capacity to glide effortlessly over a beat in his trademark half-mumbled cadence.

But there was gas on the fire in those days, a half-cocked sensibility that felt as though Jackson was flippantly poking fun but could also crack you in the jaw at a moment’s notice.

From the firearms and general violence-centered aesthetic of the album artwork to menacing cuts like “Back Down,” “Many Men” and “Heat,” the excitement of the illusion was tangible in the same manner as in classic crime dramas like Goodfellas and Scarface.

The latter tune even utilizes a Dre beat in which a ringing snare drum supplemented by the sound of a gun being cocked beneath blaring organ stabs makes the entire 4+ minute ordeal feel like a performance at a shooting range.

This menace can be felt perhaps most intensely in the two Eminem-produced cuts, which also boast feature verses from the Detroit native – arguably some of the best of his career, and one of which even references 2pac by name.

But even over breezy beats that feel tailor-made for the club scene such as the Dre-helmed “If I Can’t, Jackson is absolutely going for it in terms of delivery.

Classic 50 Cent pop chorus notwithstanding – the man demonstrated an astounding knack for a catchy hook almost instantaneously upon his arrival – the verses see him giving no breathing room, viciously attacking a beat for which most – later iterations of 50 Cent himself included – would have more or less phoned in with regard to delivery.

Arguably the strongest parallel between the West Coast legend and the Queens star, however, aside from the attack and delivery shared by the two for a brief time, is their respective writing and rhyming styles.

One might not be able to tell from explorations of 50 Cent’s post-2004 material, but the man at one point was a legitimately formidable rhymer, if not a traditional wordsmith in the vein of exalted New York exports such as Rakim and Nas.

While multi-syllabic, polyrhythmic rhyme schemes may have been beyond Jackson’s wheelhouse, he was always reliable for a clever turn of phrase, creative flow, and rhymes that would often catch listeners by surprise.

Like the Ringo Starrs and Kurt Cobains of the world, Jackson was no technical virtuoso with regard to his craft, but his was a sound distinct enough to prevail and excite nonetheless.

2pac is also an artist who falls into such a category. Despite consistently being named one of the greatest rappers of all time, Shakur’s technical and lyrical capacity as an emcee was nowhere near that of contemporaries such as Raekwon, Nas, or even friend-turned-rival The Notorious B.I.G.

Still, Shakur had a conviction and enthusiasm that carried his work, and it came from such an inspired and genuine place that it didn’t necessarily matter whether there was a great deal of technical wizardry involved with regard to the execution.

50 Cent fit the bill of this very characterization to a tee when he first emerged on the popular music scene, and this, compounded by the rapper’s image, marketing, subject matter, and ties with Dr. Dre who also worked with Shakur during his time with Deathrow Records – refer to disc 2, track 1, “Can’t C Me,” of Shakur’s magnum opus All Eyez On Me for a prime example of the rapper’s trademark energy at work.

By all appearances, 50 Cent should have progressed to become the heir apparent to 2pac, and perhaps for a brief time he was such. But can the man truly be criticized for playing the long game and being smart about his dealings?

In an alternate timeline wherein the passion had not been permitted to fizzle out, would Jackson have succumbed to a similar fate to that of Shakur? Truly, there is no way of knowing.

But in any case, we will always have that first album – a sonic document delineating the brief window in music history in which the world saw what could feasibly have been considered the “next” 2pac.