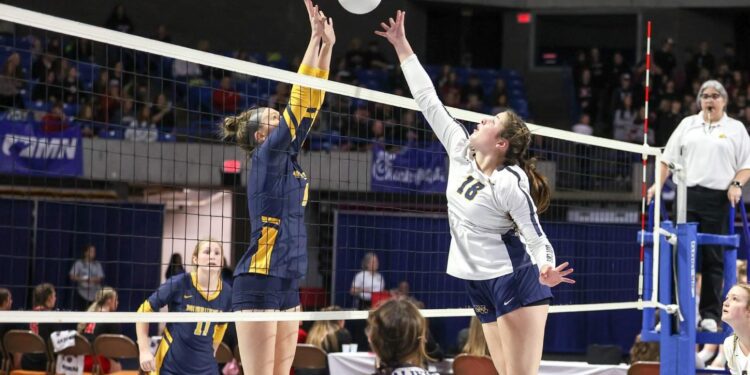 Greenbrier West senior Meagan Poticher had her heart set on being a cheerleader at a young age.

Life, however, had a different plan for her.

The cheerleading dream faded as she grew taller over the years, but as one dream slipped away, Poticher found success not only in another sport, but in three.

Through hard work and perseverance, the Cavalier standout has become a nemesis at the net in volleyball, a rebounding machine in basketball and an accomplished track athlete in the discus and shot put.

“Meagan is so talented and she is an inspiration to those girls. She will do different little activities to help the team bonding and she is a leader on the floor,” Greenbrier West  head volleyball coach Cindy Nutter said. “She is smart, athletic and she is beautiful.”

Three weeks ago, all of her hard work paid off when she signed a National Letter of Intent to play volleyball at Concord University for head coach Kate Dillon.

Poticher admitted, signing to play volleyball came as a bit of a shock.

“I had not planned on playing any sports in college. It wasn’t even something I saw as a possibility,” Poticher said. “When I got the offer from coach Dillon I was not expecting it, but I was happy to do it. If anything, I had almost thought about throwing discus in college. Which I have done for the shortest amount of time.”

While her ability to block opposing attackers at the net caught the most attention, Poticher also became a strong hitter this season for the Cavaliers. Following a serious knee injury during her freshman basketball season, gaining the confidence to swing was a tough hurdle to cross.

“It was something that I struggled with a little bit after I had surgery. Hitting requires a lot of jumping and I was a little nervous about jumping and landing wrong,” Poticher explained. “I was also concerned about making a mistake. You never want to make a mistake.”

According to her coach, her ability to rise above those fears has been a crucial part of her success.

Poticher earned all-state recognition this year and was selected to play in the North-South All-star game at Woodrow Wilson High School.

“It is really big honor to get the chance to play with all of these other girls that I played against for so long,” Poticher said.

The Greenbrier West standout is also looking forward to playing with Shady Spring standouts Meg Williams and Chloe Thompson who have signed to play volleyball for the Mountain Lions next year as well.

“Those two are insane,” Poticher said, smiling. “It will be great to learn from them, especially with them being so talented.”

Truth be told, Poticher has the ability to play at the next level in all three sports.

Throwing the discus and competing in the shot put for the first time in high school as a sophomore, Poticher qualified for the state meet in both events.

Last year she was the Class A Region 3 champion in the discus, besting her throw from the previous year by over 16 feet. She also finished third in the shot put during regionals.

At the state meet this past spring she improved nine spots with a fifth place finish in the discus.

On the basketball court, her presence in the low post has been a big key for the Cavaliers and vaulting them into the state tournament conversation.

During her junior season on the hardwood, Poticher hauled down 222 rebounds, an average of 11 per night and scored nearly eight points per game to go along with 31 blocks on the season.

“Everybody on the court has their own job and what they are supposed to do,” Poticher said. “(Head basketball) coach (Mark) Agee puts me in there to rebound and that is what I do to help my team out.”

Agee looks for his star post player to have another big season.

“She was close last year to getting the (career) rebounding record for us and we are hoping that she can get the record this year,” Agee said.

Having been to the big dance in volleyball and track, Poticher is hoping to add basketball to her state tournament ventures.

“I think we have the ability to do great things this year,” Poticher said. “We did lose a player due to injury, so that will be some adversity that we are going to have to work through.”

Poticher and the Cavaliers are off to a solid start with wins over Richwood and Covington, Va. In the opener, the senior standout scored nine points and grabbed 15 rebounds. She backed that up in game two by netting 12 points and pulling down eight rebounds.