The schedule features six home dates, with four conference games and matchups against Virginia Tech and Long Island. The season begins Sept. 4 at Maryland and also will have five Big 12 road dates.

“The release of the 2021 football schedule is, hopefully, the first step to getting things back to a normal athletic season,” Lyons said. “I know our players, coaches and fans want that and now we can start working toward that goal. We will have six home games and a road trip to Maryland that will be easily accessible for our fan base, and I believe there will be plenty of excitement surrounding our team as we head into the season.”

The nonconference schedule features the road opener at Maryland (Sept. 4), followed by home games with Long Island (Sept. 11) and the Battle for the Black Diamond Trophy against Virginia Tech (Sept. 18). 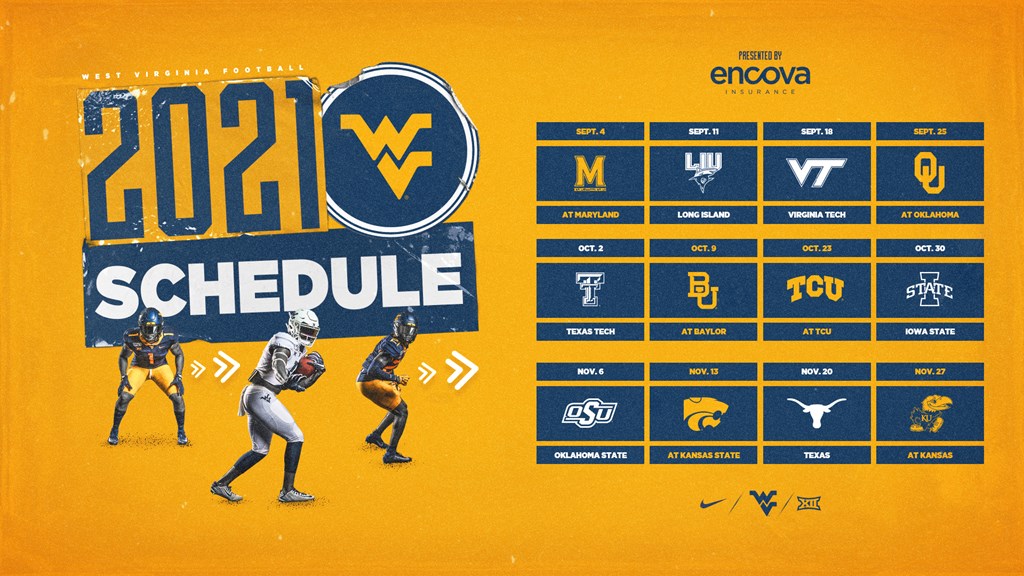 In two of the top five longest series in Mountaineer history, the Maryland and Virginia Tech games mark the 53rd contest in each of the series. This will mark the first time that WVU and Maryland have played since 2015 and the first time since 2014 in College Park. The 2020 games was scheduled to be played in Morgantown but COVID-19 forced the contest to be canceled. The last time that WVU and Virginia Tech met on the gridiron was in 2017 at FedExField in Landover, Maryland, and the last visit by the Hokies to Morgantown was in 2005.

“This is a tough schedule, not only with the Big 12 Conference lineup, but also nonconference games against Power 5 teams Virginia Tech and Maryland,” WVU football coach Neal Brown said. “The schedule opens with six straight games before an open week on Oct. 16, and then we close the season with six more. Each half of the season is comprised of three home games and three road games. The schedule also gives our fans a chance to enjoy six home games and a short road trip to College Park for a game against the Terps.”

The top two finishers in the regular-season standings will compete for the conference title in the Big 12 Football Championship Game, which is scheduled in 2021 for Saturday, Dec. 4 In Arlington, Texas.