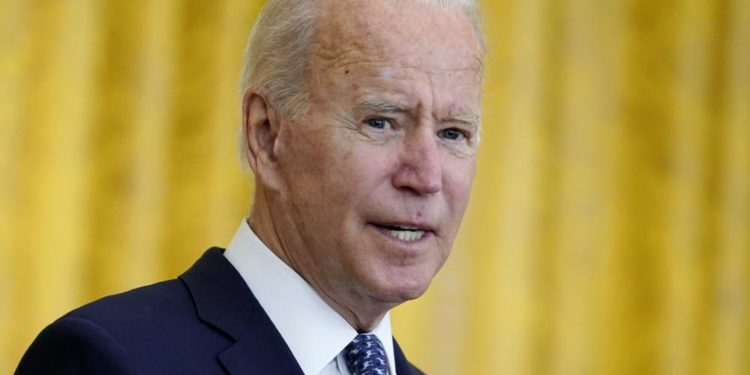 Despite the leftist media’s relentless unified efforts to prop up the incompetent Biden-Harris administration, the President’s poll numbers continue to be in the basement. The decline in his approval rating has spanned for months, such that it is unlikely that the American public’s negative perception of this bungling administration is merely transitory in nature. Even the strenuous efforts of the sycophantic press have not been sufficient to overcome the blatant deficiencies in leadership that the American people have witnessed over the course of the past twelve months. This is not to say that the media has been lax in exerting effort to convince the American people that this administration is doing a spectacular job. It’s just that the majority of Americans are intelligent free-thinkers and are able to see through the nonsense and get to the truth.

While the President strains with such challenging mental tasks as recalling the name of the Attorney General, the liberal media also seems to have memory failure. An example of this collective amnesia is the corporate media’s outrage over the audacity of the 75% of Republicans who do not believe that Joe Biden legitimately won the election. The scornful liberal talking heads indignantly take issue with the tens of millions of Americans who question the legitimacy of the election. The leftist media pundits routinely suggest that Republicans who hold such beliefs are undermining democracy. Yet this attitude of shut-up-and-accept-the-results-of-the-election, was not the posture of the socialist Democrats and their comrades in the media throughout the entirety of the Trump presidency. In fact, it was quite the opposite.

Shortly after the 2016 presidential election, a WashingtonPost-ABC News Poll found that a third of Hillary Clinton supporters did not accept that Trump was the legitimate winner of the election. See One-Third of Clinton supporters say Trump election is not legitimate, poll finds, by Scott Clement, Washington Post, Nov. 13, 2016. Remember those protests in the streets of Washington D.C. in January of 2017 with such erudite voices as the Immaterial Girl and Wynonna Judd’s little sister calling for resistance? Well, that Trump resistance movement is evidently still a thing, even though President Trump isn’t the present office holder. Though so many Republicans, including President Trump, have been censored or banned altogether from social media since the November 2020 election, the Trump Resistance Movement (TRM) page, established in November of 2016, still has an active home on Facebook, where it boasts more than 380,000 followers.

And what about the words of the former Secretary of State, Hillary Clinton, that called into question the legitimacy of the Trump presidency? In a CBS Sunday morning interview with Jane Pauley in September of 2019, Clinton referred to President Trump as an “illegitimate president.” In August of 2020, leading up to the November election, she stated that Biden should not concede the election “under any circumstances.” See Hillary Clinton says Joe Biden should not concede on election night, by Jason Lange, Aug. 25, 2020, reuters.com. In an interview last month on Sunday TODAY with Willie Geist, Clinton dismally mused that if President Trump “or someone of his ilk” were to win the election in 2024 it could be “the end of our democracy.” None of these comments by Clinton sound exactly unifying or constructive. Yet, where was the mainstream media’s condemnation of Clinton’s comments as delegitimizing the 2016 election results and fostering a destabilizing effect on democracy? Crickets. The liberal press largely endorsed Clinton’s big lie and propagated the notion that Trump’s victory was not legitimate.

At the end of the day, it was woefully predictable that the liberal press would warmly embrace the comments made by Hillary Clinton and other former or current public officials who questioned the validity of the Trump presidency for four years. Thus, any press outrage over such a large number of Americans opining that Biden did not legitimately win the election is manufactured and disingenuous. Just as it’s unsurprising that Hillary Clinton claims that Donald Trump was not a legitimate president, it’s unsurprising that tens of millions of Americans don’t believe that Joe Biden is a legitimate president. The press may have amnesia as to the four years of relentless and vicious attacks on the legitimacy of the Trump presidency, but tens of millions of Americans have long memories.