West Virginia’s Moore Capito aims to follow in his famous mother and grandfather’s footsteps as he launches a campaign for statewide office.

Capito, a Republican leader in the West Virginia House of Delegates, on Tuesday announced his candidacy for governor in the race to succeed term-limited GOP Gov. Jim Justice, who’s mulling a Senate bid against Democratic Sen. Joe Manchin, a former governor.

Capito, the son of Republican Sen. Shelley Moore Capito and grandson of Arch Moore Jr. who served a dozen years as West Virginia governor during the 1960s, 70s, and 80s, made his announcement on the Charleston-based radio program hosted by Hoppy Kercheval, the “dean” of West Virginia broadcasters.

The campaign launch was shared first nationally with Fox News.

“I am a lifelong West Virginian, the product of our public schools, and now the father of two children,” Capito highlighted in a campaign video announcing his gubernatorial bid. “I have a special personal commitment to the State of West Virginia and its citizens to bring my energy, creativity, and best efforts to seeing our goals achieved. With this vision, I am asking you to join me, Moore Capito, as I seek my party’s nomination for Governor.”

Capito touted that “West Virginia’s economy is strong, and I am proud to have led in that effort with the conservative principles that enable its growth.”

And looking forward he urged that “we must reduce taxes on hardworking West Virginia families and businesses and incentivize greater investment in our natural resources and emerging technologies. We must improve student achievement at West Virginia schools by listening to parents and letting our teachers inspire, and ensure our youth find hope and jobs here.”

Capito becomes the second declared candidate running for the GOP gubernatorial nomination, following Chris Miller, a businessman known for his colorful car commercials and son of Rep. Carol Miller, who launched his campaign nearly a year ago.

Another member of the Capito political dynasty, West Virginia treasurer Riley Moore — who is Moore Capito’s cousin — announced earlier this month that he’s running for Congress.

Justice, who was first elected governor as a Democrat in 2016, moved to the GOP a year later and won re-election as a Republican in 2020. He said earlier this month that he’s “very seriously considering running for Senate,” joining several other politicians who are also considering bids, in the hopes of challenging Manchin in 2024 in a state that’s quickly shifted to the right in recent election cycles.

Manchin is viewed as one of the most vulnerable Senate Democrats up for re-election in 2024. 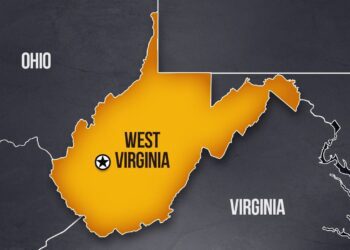