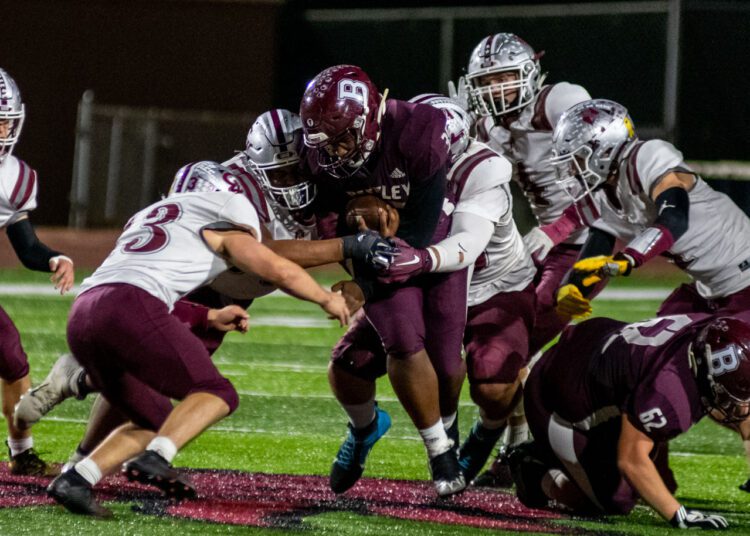 Throughout the 2022 football season when Woodrow Wilson has struggled, the majority of the woes have been self-inflicted.

Friday night when the No. 14 Flying Eagles welcomed No. 6 (tie) George Washington to Van Meter Stadium on Senior Night, the story was the same in a 26-10 win by the Patriots.

“Turnovers killed us all night,” Woodrow Wilson head coach Street Sarrett said. “That is just how it goes.”

Trailing 7-6 at the break, George Washington quickly grabbed control of the game in the opening minutes of the third quarter.

Sophomore running back Keegan Sack took the ball on the second play from scrimmage in the second half and weaved his way through the Beckley defense. Aided by some poor tacking from the Flying Eagles, Sack rumbled 73 yard for a score and a 12-7 lead.

The situation turned even more sour for Beckley when a fumble on its first play of the second half, handing the ball back to the Patriots at the home team’s 30 yard line.

Seven plays later, Sack was in the end zone again, this time on a six-yard run to push lead out to 19-7.

“It was huge for us to do that. That was our goal in the locker room,” George Washington head coach Steve Edwards said about the quick outburst in the second half. “We talked about doing some things and made some adjustments defensively which helped us a bunch. Our defense sucked it up and were willing participants tonight. What I mean by that was we made some changes that we didn’t work on all week, that we were able to accomplish and do against them in that second half.”

The score was the third touchdown of the night for Sack who scored on a 27-yard pass from Abe Fenwick in the second quarter.

The following drive for Beckley was a microcosm of the night. Driving the ball to the George Washington 29, a fumbled snap on second-and-9 resulted in a six-yard loss.

Matt Moore picked up the lost yardage on the next run to move the Flying Eagles in range for a 45-yard field goal attempt from Connor Mollohan.

Beckley was then hit with an illegal substitution penalty when too many men broke the huddle, moving the attempt back to 52 yards. Mollohan hit it good, but the ball fell just under the crossbar.

Mollohan did nail a 30-yard kick in the fourth quarter to get the Flying Eagles within nine at 19-10.

After scoring in the first half on a seven-yard run from Tylai Kimble for Beckley’s only lead, the Patriots held the Flying Eagles at bay in the final two quarters.

“We tightened it up a little bit and cut them back. We beat them at the cut game in a couple of spots and we guessed with them a little bit with our tackles,” Edwards said. “I thought my two little defensive ends, pound for pound, played really big tonight because they have some big backs. That is a good football team. They are the real deal. They block well up front and have a nice scheme.”

The final horn signaled the final time the Beckley seniors would play on the turf at Van Meter Stadium. Now Beckley turns it’s attention to the playoffs for the second year in row.

“This is a tough group of seniors. Back-to-back playoffs and this group can play with just about anybody in the state of West Virginia, I think,” Sarrett said. “These guys showed it here tonight. GW has beat some tough teams and we were leading at halftime. We came out and turned the ball over and things just didn’t go our way. There are 16 teams that are 0-0 now. We are getting ready and we are coming.”

The official pairings for the state football playoffs will be released Sunday by the WVSSAC.