Valheim is one of 2021’s big Indie games and it’s absolutely addicting. Valheim is a survival sandbox where your characters levels up in all types of skills while exploring a fantasy world. It mixes elements of Rust and Runescape while adding its own flare that has made it one of Steam’s biggest games this month.

In my first 6 hours of the game, I feel like I’ve only explored 5% of the map. The map is absolutely huge when you look at it, and I’ve only made a small dent in the unexplored minimap. During my gameplay, I built a raft with my friends where we went on a huge voyage toward a distant island. What we discovered was a really cool cave where I found a hoard of skeletons defending mounds of treasures and resources. Fighting my way through had to be so strategic because the more danger I put myself in, the more I had to lose—as when you die, you have to travel all the way back to retrieve any lost items.

But all the steps before that voyage are what make up a large portion of the gameplay. All the hunting for animals to find food and leather, the trees you chop down for the wood you carve into a shield, and the tools you craft to shape the earth into your humble settlement is what this game is about. 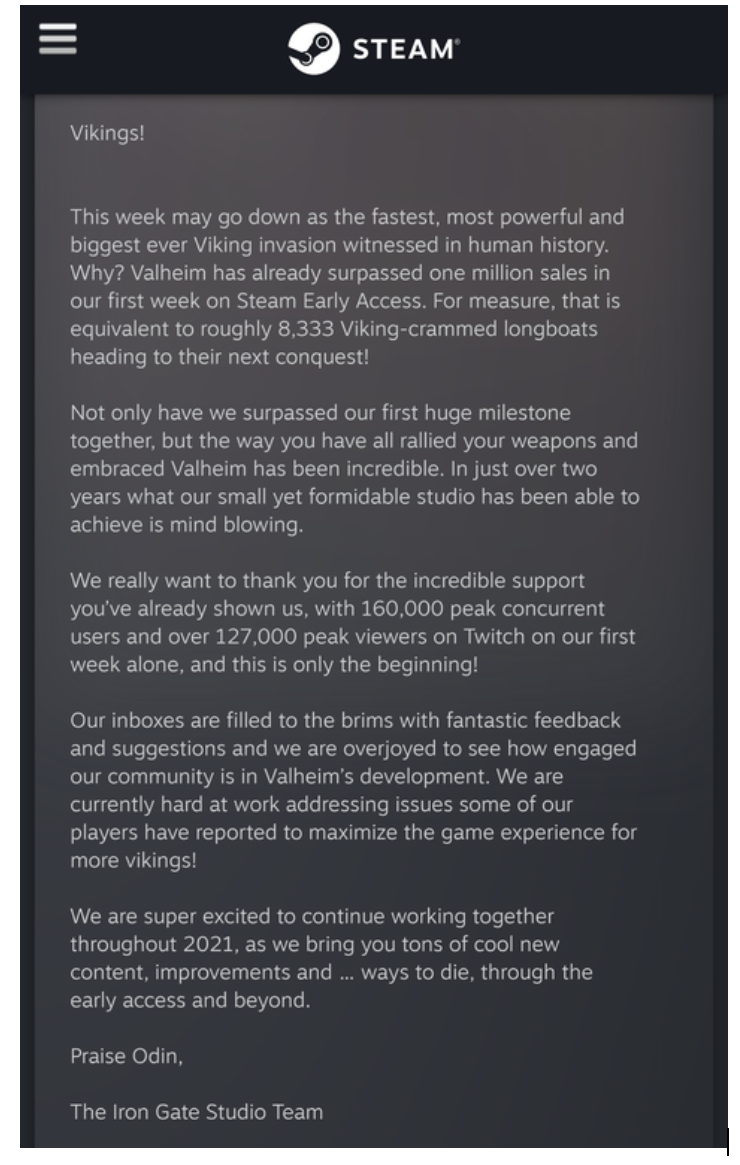 There are such rich and realistic survival elements and real-life physics incorporated into Valheim, that you find yourself looking to ventilate smoke out of your cabin so that you can keep warm during the nights without inhaling too much smoke. Weather elements are super impactful in the game, where being too cold or wet can inhibit your stamina, but make the game that bit more realistic.

The game has a captivating aesthetic to it. Textures are polygonal and pixelated, but that look is contrasted by great shading and lighting that brings an overwhelming feeling of nostalgia while reminding you it’s a modern title. I won’t forget looking up at the sky at night and seeing an awe-inspiring starscape, partly hidden by the massive world tree which branches reaching beyond the seas.

I’m not shocked that Valheim has seen such quick success. It’s STILL in early-access, and I believe there’s so much more to come with these developers and the huge support from its community. Until then, remember to stay warm and strike the iron while it’s hot.