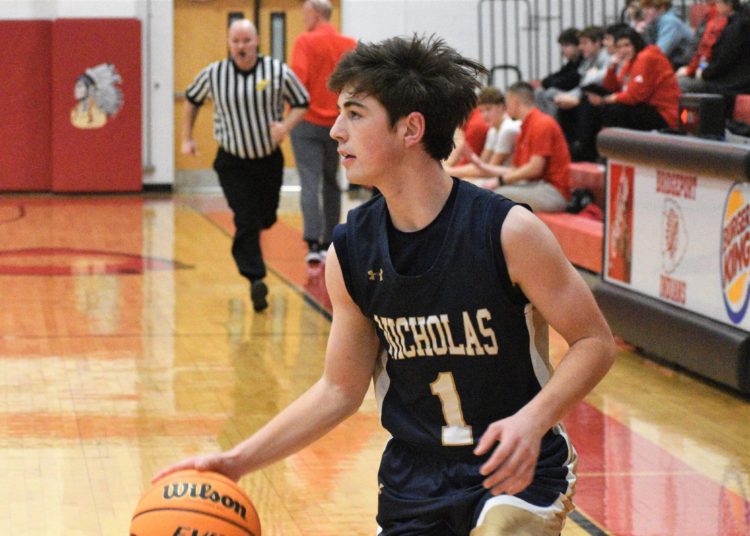 Story and photos by Sean McNamara

BRIDGEPORT – The Nicholas County Grizzlies made a trip to Harrison County on Thursday to take on the Bridgeport Indians and, despite a 60-34 loss, the experience of playing against a Big 10 Conference and Class AAA foe on the road was a challenge NC coach Brian Phipps knew would be beneficial to his team moving forward.

“When we come up this way games are more physical,” Phipps said. “That’s why I want to come up here and play because once you get to the state tournament, that’s the way games are officiated. I like coming up here and playing. You don’t want to lose, but you want to make sure you get something out of the game no matter what happens.”

In Thursday’s game, despite Bridgeport holding a height advantage inside, the Indians instead turned their attention to the perimeter game, catching fire from 3 in the process.

Bridgeport (3-3) came out the gate red hot with its first five field goals coming from 3-point range with Anthony Spatafore knocking down three triples and Ashton Curry netting a pair from behind the arc.

After a Spatafore 2 and a pair of free throws from Tyler Randolph, the Indians jumped ahead, 19-5, after the first quarter.

“Life is easier in this game when the ball goes in the hole,” Bridgeport coach Dave Marshall said. “Obviously, that helped early, so much so that we actually felt like we were taking too many 3s. But I can’t hardly complain when they’re going in the hole, and they weren’t bad shots.”

The 3-point shooting was a theme all night for the Indians, who knocked down 10-of-23 attempts from deep, with the first-quarter shots putting the Grizzlies (2-3) in a hole they were not able to climb out of.

“They were just draining 3-point shots,” Phipps said. “They were 5-of-6 in the first quarter. That’s hard to recover from. They scored 60 points in the game, and 30 of those were on 3-point shots because they hit 10 3s.

“We have to close out just a little bit harder on those kinds of things.”

In the game as a whole, the Indians made 21-of-49 shots with 15 assists on their made field goals. The ability to share the ball and have passes directly lead to shots is something that Marshall said his team has worked on as they know it will be a major factor moving forward.

While the Indians were able to swing the ball around frequently and efficiently, they also did so with great care, committing only four live-ball turnovers. This, too, is something that Marshall and his staff have emphasized to the team, and he was pleased to see how his Indians handled the ball Thursday.

Spatafore led the way in points and rebounds for Bridgeport with 17 and seven, respectively, to go along with four assists and three steals. Sanders netted 15 points in the game on 5-of-8 from behind the arc, while Ashton Curry scored 10 points with a game-high five assists.

For Nicholas County, Cole Brown hit 4-of-8 3-pointers and led the Grizzlies in scoring with 12. Austin Altizer, Isaiah Miner and Bryar Bailes all pitched in five points in the loss with Ethan Collins recording a team-high three assists.

Thursday’s test on the road was what Phipps expected, and he hopes to see his team grow and learn from it moving forward.

“We understood tonight that we need to play more physical,” Phipps said. “Hats off to Coach Marshall and his staff. They do a great job and best of luck to them. We just have to make sure we do the little things better.”

Thursday’s game marked the final contest for both squads in 2022, and each will be back in action next week as Bridgeport will host Liberty on January 3 and Nicholas County will host Herbert Hoover on January 4.