Prep Football: Princeton falls in shootout with No. 1 Patriots 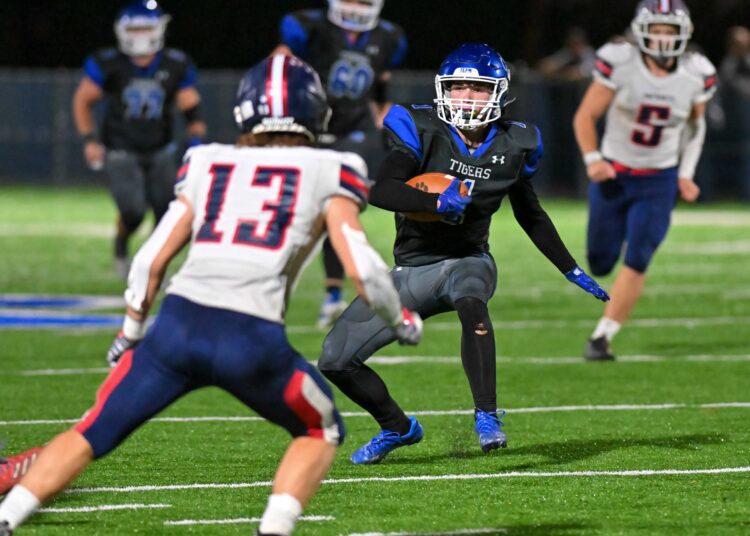 Princeton – It took Parkersburg South nearly two quarters to get out of its own way but when it finally did the Patriot offense was unstoppable.

Trailing 21-7 21 minutes into Friday’s matchup with No. 8 Princeton, the No. 1-rated Patriots struck quickly and often, running off 28 unanswered points and holding off the Tigers 49-41 Friday at Hunnicutt Stadium.

After a muffed kickoff return and a failed fake punt attempt by the visiting Patriots worked in favor of the Tigers, Parkersburg South head coach Nate Tanner elected to roll the dice once more in his own territory late in the first half. Trailing 21-14 and facing third-and-25 from his own nine with under a minute left, Tanner threw caution to the wind and it paid off.

Four plays, 91 yards and 30 seconds later the Patriots had stolen the momentum. The gamble paid dividends for Tanner and Co., proving to be the most pivotal drive in a one-score game.

“I think it’s within our culture that we’re aggressive,” Tanner said. “I’m like that and our defensive coordinator is like that. We try to get our kids to be like that whether it be the weight room, practice or games. We were backed up, but Cyrus Traugh is a Division I football player. He’s got some offers and there’s going to be a lot of people that miss out on that young man. I had in my notes what to do if we got behind the chains and I just glanced down and said ‘Why not?’ We ran a middle screen to him and he made a huge play and got the first down and then we just did what we do. We moved fast and executed down the field.”

A middle screen to Traugh picked up 25 yards for the first down and a 38-yard completion from Robert Shockey to Traugh set up an eventual touchdown pass from Shockey to Dylan Fleak for the equalizing score.

It was refreshing for the Patriot faithful that made the trip south after a disastrous start to the game.

After Gage Wright scored on a 16-yard run on South’s first drive, the visitors repeatedly stumbled through the first half.

A one-yard touchdown run by Princeton freshman Brad Mossor tied the game but a fumble on the ensuing kickoff return was recovered by the Tigers at the South 5. The Tigers made nothing of the opportunity after the snap on the field goal attempt was bobbled, but a sack on South’s following drive forced a punt.

Facing fourth-and-2, Princeton coach Chris Pedigo rolled the dice, motioning running back Brodee Rice from right to left and he outflanked the end on a wheel route, allowing Princeton QB Grant Cochran to drop a 27-yard scoring strike in his mitts.

Bad turned worse for South on its following drive with a fake punt snuffed out at the 24. It only took Cochran and Co. one play to make it hurt as a screen to receiver Dominick Collins turned into a 24-yard touchdown pass and a 21-7 lead for the hosts with 7:13 left in the half.

Q2 7:13
South tried a fake punt and turns it over. The next play - Collins 24 yard pass from Cochran
Princeton 21, Parkersburg South 7#wvprepfb pic.twitter.com/Y1raSbOKaZ

Wright found paydrit on a 10-play 81-yard drive, scoring from 23 yards out to make it 21-14 and set up the sequence before the half.

Out of the locker room the Tigers failed to contain the Patriot offense with drives of 67 and 70 yards both ending in Wright touchdown runs.

A one-yard run from Brodee Rice broke up the streak of 28 unanswered points but an onside kick attempt was unsuccessful and Shockey made it hurt in one play with a 34-yard scoring strike to Traugh.

While Traugh was relatively quiet outside of the drive before the half, Shockey proved difficult for Princeton to contain, scrambling and extending plays with his legs, often breaking contain for back-breaking plays.

“It’s a challenge on the back end,” Princeton coach Chris Pedigo said. “Shockey is a heck of a football player and we’ve seen that when we were preparing for him. He extends plays and we wanted to shutdown their inside run game. We thought we did a really good job of that. We gave a little bit of stack look that we hadn’t done a whole lot of. But we had some soft edges. We went back to what we normally do in our spread sets and I thought we did a good job of keeping contain but they’ve got dudes and they made a few more plays than we did.”

Despite grabbing the lead, South never could shake Princeton, leading to a close call.

After Collins and Cochran connected for a 58-yard touchdown with 1:29 left to make it 49-41, a bad snap and a rush for a loss put the Patriots in a third-and-20 situation with a minute to go. Looking for the knockout blow, Shockey threw down the middle and was picked by Brad Mossor. Unfortunately for the hosts their hopes were dashed when a fourth-and-16 prayer from the South 31 fell incomplete as the final buzzer sounded.

“We had some self-inflicted wounds but Princeton is a really good football team and you have to give their guys credit,” Tanner said. “On the kickoff it was windy and they made a great play. We gave them a short field several times but man, I’m so proud of our kids the way they kept digging and fighting and scratching. I told them at halftime that a lot of teams fold up after going down 21-7. It’s an away game and a three-hour trip in a hostile environment and our kids just kept finding ways. The second half we were able to put some clean football together but they’re a good team with some explosive playmakers but I’m proud of our team for getting it done.”

Despite the loss Princeton’s Collins broke the program’s single-season receiving yardage record with 947 yards, also adding to his receiving touchdown total with scores 17 and 18 through the air, topping the marks set by 2020 Moss Award winner Ethan Parsons.

“The only thing’s he missing is a little length but he makes up for that with speed,” Pedigo said. “We knew coming into the season that if he plays at the next level he’s probably going to be more suited for the slot but what he does for us is take the top off. Traugh got beat a lot tonight but we just didn’t make the plays, but that happens when you play man coverage, you’re going to get beat a lot and go with percentages. We’ve made those plays this year and didn’t make them as much last year … He’s a special kid and he’s worked for everything he’s got. He’s a weight room warrior.”

Wright led the Patriots with 15 carries for 164 yards while Shockey threw for 210 yards, connecting with Traugh five times for 100 yards.

Princeton finishes the regular season with a 6-3 record and will be in the road for the first game of the playoffs. Unofficial projections have the Tigers earning the No. 12 seed in the Class AAA playoffs and traveling to No. 5 George Washington, though the official WVSSAC ratings will be released Saturday.

Parkersburg South improves to 9-1 and will likely host throughout the playoffs.